Regimental Fire and Fury
Wargaming the Civil War with Miniatures

Fire and Fury remains one of the most popular historical military miniatures wargames in the hobby. This new regimental edition provides players a more in-depth look at American Civil War combat. The smaller scale allows you to take command of individual regiments and batteries and refight in greater detail many of the war's smaller engagements, as well as critical actions of the conflict's famous battles.

For the new player it is an easy game to learn and enjoy. The veteran Fire and Fury gamer will find much that is familiar, like the play sequence, maneuver table, and combat system, while discovering a game taken to a new level of sophistication. Refined game mechanics strike a balance between playability and historical accuracy that draw upon twenty years of the Fire and Fury gaming experience. 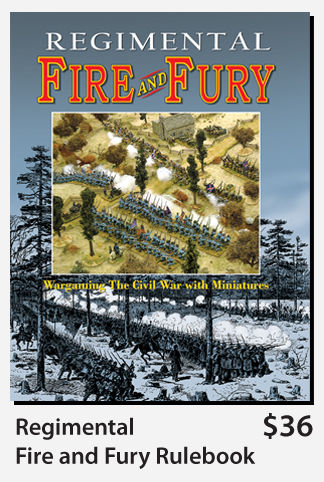 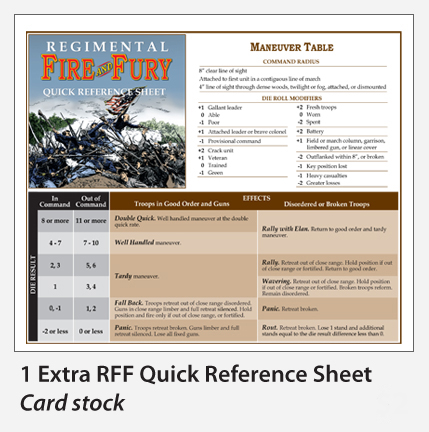 Out of Stock see the RFF Support Page for .pdf download versions

Scope:A set of wargame rules using military miniatures, that allows players to recreate the small engagements and portions of larger battles of the American Civil War, 1861-1864.

Scale: Tactical. 10-15 minutes per turn. 1" = 25 yards. Units are regiments of infantry or cavalry and gun sections grouped into batteries for artillery. Intended for 15mm figures, other scale figures can be used by increasing or decreasing the basing and ground scales as described in the rules.

Basing:Each 1" x 3/4" stand with 3 infantry figures, and 1" x 1" with 2 cavalry figures, represents 40 men. Each 1" x 1-1/2" stand with a gun model and 2 or 3 figure crew represents a 2-gun section. Unit size can range from 3 to 20 troop stands per regiment, with the average of 8-12 stands per unit. Batteries are represented by 2 to 3 gun stands. The Regimental game uses the same standard basing used in Brigade Fire and Fury so you can play both systems using the same miniature armies.

Game Turn Sequence. A game turn is divided into an alternating Union player turn and Confederate player turn. Players must follow the Player Turn Sequence. Each player turn consists of three phases. One phase must be completed before moving to the next. Some activities in a phase are performed by the opposing player or jointly by both players.

Maneuver (1st) Phase. In the first phase of a player turn the player must resolve a maneuver check for each unit which he controls on the game table. A maneuver check involves either one or more units under the command of a single leader, or a single unit that is out of command. The maneuver check combines the elements in warfare of morale, command and control into a single die roll procedure using the Maneuver Table. The effects from the table describe the movement and other maneuvers that each unit is allowed or required to perform in this phase.

Charge (3rd) Phase. In the third and final phase of a player turn a charge combat must be resolved wherever a charging unit made contact with the enemy. The relative position between attacking and defending units will determine which combats need to be divided into less complex combat situations. Both sides then follow a joint die roll procedure to resolve a round of charge combat. The Charge Table is used to determine casualties and other combat effects. Depending on the results of the first round of combat, a second round of breakthrough charge combat may follow after all first round charge combats are resolved. After all charge combat is resolved, the current player turn ends and the next player turn begins.

Battle Scenarios: The book provides guidelines for designing your own scenarios and six historical scenarios covering different periods and theaters of the war: