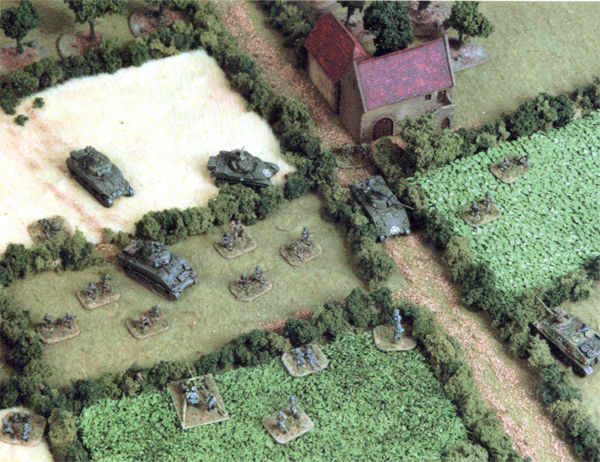 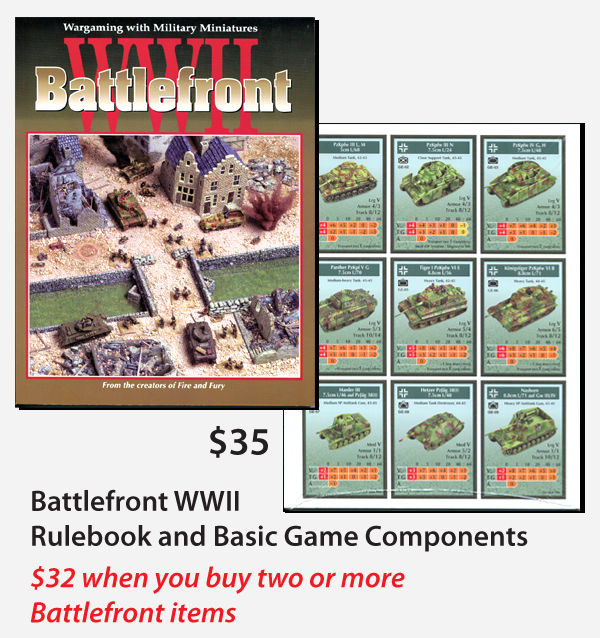 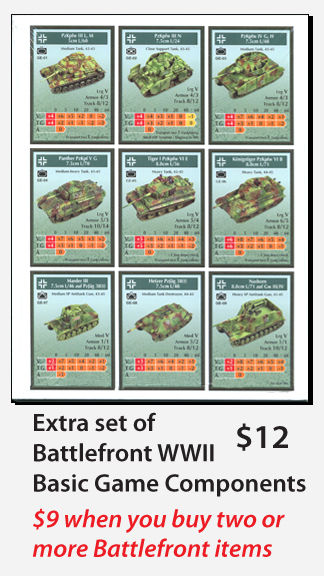 Battlefront WWII is a tactical level wargame of World War II ground combat using miniature soldiers and vehicles. The basic organization is the "maneuver element" which is usually a company sized formation of units which fight as a group. Each player takes command of one or more maneuver elements to refight either historical or hypothetical battles.

The Second World War was by far the largest military conflict in human history. Large-scale ground combat on three continents provides the miniature wargamer with a virtually limitless number of military actions to recreate, and more weapons and tactics than any other historical gaming period. Battlefront WWII allows players to explore the depth of this unique era by incorporating innovative game mechanics and intuitive graphic aids, enabling players to concentrate on the intricacies of combined arms tactics rather than the mechanics of the rules.

World War Two was the company commander's war, the front-line infantry or rifle company being the basic unit of tactical maneuver. The German and Soviet armies both discovered that the actual combat element almost invariably turned out to be 80-100 men. Anything larger and the company commander tended to lose control, anything smaller and casualties quickly made it ineffective. Grimly, the great majority of the casualties in all of the armies came from the men in these front-line infantry companies.

Battlefront WWII is designed to model this tactical level of combat. The basic organization used is the "maneuver element" which is usually a company sized formation of units which fight as a group. In Battlefront WWII each player takes command of one or more maneuver elements. A game involving several players may recreate tactical actions between opposing battalion or regimental sized forces and can be finished in a single evening.

When we started playing armor miniatures games, we often found ourselves spending more time looking things up in the rulebooks than we did fighting the battle. Many rules present the player with reams of charts and tables, attempting to model every detail of combat. The player is supposed to command a battalion or larger formation at the same time deciding what kind of ammunition Pvt. Schultz loads into his rifle.

Battlefront WWII takes a different approach. By abstracting the detailed mechanics of combat, we allow the gamer to rapidly fight the battle and take the decisions that are appropriate for an overall commander. We assume that Pvt. Schultz was trained by his army to know what kind of ammunition to use, so that decision does not properly lie with his commander (the gamer). Forward observers are trained to call fire, tankers to drive tanks and shoot, infantry to advance by rushes, etc. How well they do this is influenced by the extent of their training and also their morale. The actual mechanics of doing these activities should not be the responsibility of the gamer. 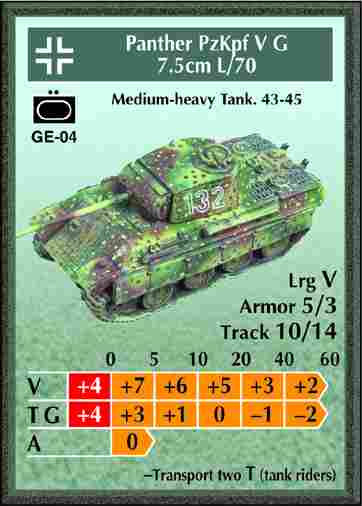 At the same time, one of the fascinating aspects of World War II combat is the interaction between different types of units. We balance the need for abstraction with the need for interesting detail by distilling the different combat capabilities into "Unit Data Cards". A separate unit card is provided for every type of vehicle, gun, and infantry unit used in the game (for a full list of cards included in the basic game components, click here). To the right is a sample unit card for the German Panther Tank. For an explanation of how the card works, click here. The cards not only provide a concise game aid, but can also be used as a painting guide.

Abstract does not mean inaccurate. We did NOT ignore the details of combat and vehicle management, range/penetration effects, artillery correction, rate of fire, and other details that occupy the gamer's time in other rules. We spent a great deal of effort in getting the factors on the cards correct and there are subtle differences in the capabilities of the units that are caused by these details. For example, the US M-18 tank destroyer is slightly more effective at anti-tank fire than other U.S. vehicles that use the same gun. This difference is due to the U.S. Army's doctrine of giving these tank destroyer units more of the effective anti-armor rounds than were given to the tanks. However, this doctrine is outside of the gamer's control so it was incorporated into the unit card. The charts and data cards allow the players to feel the effects of the details without having to calculate them.

The result of the abstraction is that gamers must take their decisions based on the general capabilities of their units instead of perfect knowledge. Rather than basing a decision on the fact that a gun will penetrate "X mm of armor at range Y", facts which were not known by the unit commanders at the time, the decision will be based on the knowledge that "my tanks are more effective at long range" or "I must close rapidly to be effective". We feel that this type of decision more accurately models the decisions that are made by actual commanders. Also, these decisions can be made much more rapidly than the conventional approach taken in tactical games. You will spend your time playing the game instead of looking up values in charts.

Battlefront WWII is an "I go, you go" game. One side fires, moves, and completes its actions, then the other side does the same. Each player turn consists of the following basic steps:


We have found that this sequence moves quickly enough to keep both players fully involved while properly modeling the feel of the battle. 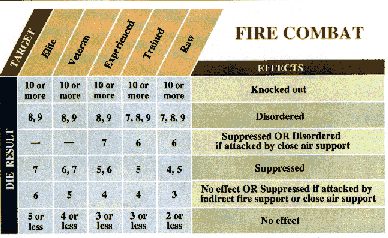 Combat is resolved by a simple differential system. The attacker's strength is determined from based on weapon capabilities and modified by the type of attack, situation, and a random die roll. The defender's strength is a function of armor and terrain. You subtract the defender's strength from the attacker's strength to yield a differential that shows how effective the attack can be. The effect of the attack will range from "No effect" to "knocked out" with the majority of results being changes in "order status" which effects morale and combat effectiveness. If they are not destroyed outright, better quality troops are effected less by combat and this is reflected in the combat results chart.

Since the same sequence is followed for direct fire, artillery, and aircraft attacks. Players rapidly become acquainted with the mechanics of combat resolution and the capabilities of their units and are able to quickly resolve combat. 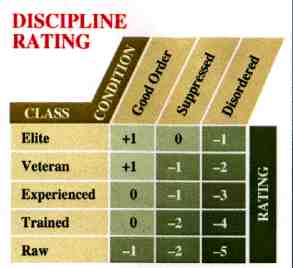 We did feel that training and morale are critical for an understanding of modern battles. The Discipline Rating table modifies almost every action that can be taken. Units with superior training and morale will be much more effective (+ is good, - is bad). The discipline rating table gives us a way of showing how good training and high morale can sometimes be more important than equipment type.

Every turn, each maneuver element must determine how well it will perform. All units in the group are effected. At the beginning of the game, units will generally perform as the player desires. As maneuver elements take casualties, they become less effective and units in them may decide to stay put or even run away. Of course better quality units are less likely to be effected than poor ones. This forces the player to consider keeping a fresh company as a reserve, where it can sometimes turn the tide. 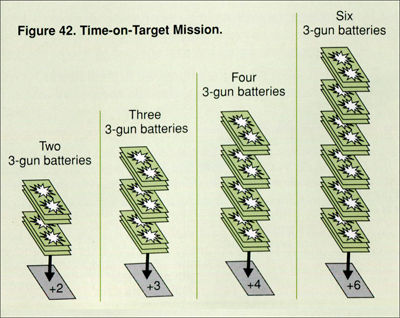 Artillery was the great killer in World War II. However, there were great differences in how it was employed by the different nations. Even though all combat is resolved with the same differential mechanism, our artillery rules manage to capture national differences in doctrine and effectiveness. Each side can choose a variety of fire missions that reflect how their armies used their artillery. This will lead to various modifications of weapon strength. Perhaps the most effective example is the American's "Time on Target" where they could concentrate several full batteries of artillery so that all the shells land on the target in a short period of time. The diagram to the right gives the basic idea. A multi-battery time-on-target mission can get the attention of even the largest German Tanks.

One of the strongest features of Battlefront WWII is its emphasis on proper force composition and organization. In addition to specific orders of battle in our scenarios, we present large numbers of Tables of Organization and Equipment (TOE) for the various forces represented in the rules. These are presented in the context of the game, showing how maneuver elements are built from individual units and then how higher echelon formations are built from maneuver elements. We show how additional attachments are made from higher echelon formations to build a proper historically balanced force. For an example of this hierarchy, click here.